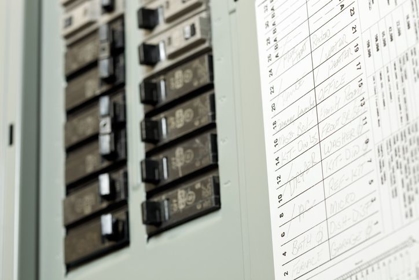 Before we can understand what these are why protection is so important, let’s step back a bit…

WHAT IS A CIRCUIT BREAKER?

Exactly what it sounds like – it breaks circuits. Simply, it’s a switch that when it senses damage or overflow, cuts the flow of electricity in order to prevent damage to electrical appliances and ultimately fires. Essential and potentially life-saving.

WHERE DID THE IDEA OF A CIRCUIT BREAKER COME FROM?

Thomas Edison is credited with their creation. Applying for a patent in 1879, the circuit breaker was designed to protect electrical lights from short circuits and overloads. The Boston Electric Light Company was the first to actually implement the usage of circuit breakers – originally called electrical breakers.

GREAT, BUT WHY DO I NEED TO KNOW ABOUT CIRCUIT BREAKERS & ‘ARCING?’

Do you use electricity where you live? If so, then this is something that you should be very familiar with and have up to code. Here’s why – Arcing or an arc flash, occurs when flows or discharges of electricity happen along an unintended path. That’s when electricity jumps an “arc” to a nearby grounded object. These “arc faults” are caused by low and erratic electrical flows. Most common reason for that – frayed and/or exposed wires. And they can occur ANYWHERE in an exposed wire and ANYWHERE in a building. About half of these arc flashes happen in appliances, computers and items that run on electricity. About 36% occur directly in electrical panels.

HOW WILL I KNOW IF IT’S HAPPENING?

When you hear a light switch or an outlet hissing or buzzing, then you are actually hearing arcing as it happens. That arcing translates to heat, which in turn can break down other surrounding conducting wires. That breakdown can be the trigger for electrical fires. If you’re hearing a switch buzz, that doesn’t necessarily mean the fire is imminent, but it does indicate potential danger and it should be addressed.

I’M CONFUSED. I HAVE CIRCUIT BREAKERS AND GFCIS ALREADY, SO WHY DO I NEED ARC-FAULT PROTECTION?

There are actually 3 terms here – arc fault, ground fault and short circuit. Often confused or interchanged, these actually have different meanings and need different strategies applied for prevention. Let’s go through each:

What everyone is likely most familiar with is the Short circuit - a situation where an energized ‘hot’ current strays outside of the established wiring system, making contact with neutral wiring pathways or grounding pathways. The flow exceeds the amperage capacity and the circuit breaker controlling the circuit trips to stop the flow of the current.

A Ground Fault, is a specific type of short circuit where energized ‘hot’ currents make accidental contact with the ground. In these cases, the circuit breaker may not react quickly enough to prevent shock so the electrical code requires special protective devices or GFCIs (ground-fault circuit interrupters) to be installed. You’ll typically find these near plumbing pipes or outdoor locations, where ground faults are more likely to occur. These devices shut down a circuit very fast, typically before a shock is felt and are intended to guard against shock.

An Arc Fault is when corroded wires or loose wire connections cause sparking or arcing. That can create heat and thereby a potential for an electrical fire. Although an arc fault could be the precursor to a short circuit or a ground fault, it is not typically shut down by a circuit breaker or a GFCI. The way to guard against arc faults is to install an AFCI (arc-fault circuit interrupter) by either an AFCI outlet or an AFCI circuit breaker. AFCI’s are intended to guard against the potential of fire.

HOW DO I BEST PROTECT MY HOME AND MY FAMILY?

The electrical code, updated every 3 years, has gradually increased its requirements for AFCI protection on circuits. Since 2014, nearly all circuits supplying general outlets in living spaces are required to have AFCI protection – in new construction and newly remodeled. Keep in mind that AFCI does NOT replace GFCI protection. They serve 2 different functions and both are necessary, protecting against fires and shock. When a circuit is extended or updated during a remodel, it must be updated with AFCI protection as part of the National Electrical Code. There are also AFCI/CFCI circuit breakers that can offer both types of protection to the entire circuit.

Contact us today to schedule a safety inspection. We want to be sure that your electrical system is up to code and working as safely and efficiently as it should be to protect your family. Visit our site to learn more about our services or give us a call at 978.910.0021.